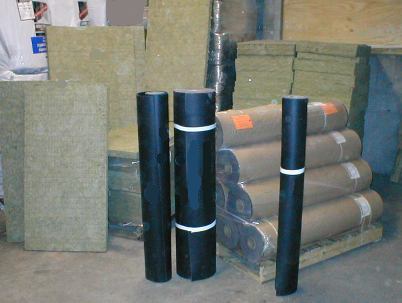 Barricade Noise Barrier may be installed in conventional wall construction or in a staggered stud assembly for higher STC results.

The actual difference between the "staggered stud" and the "standard stud" arrangement (diagrams below) differs very little with regard to acoustic performance. A great deal of difference can be realized by replacing the fiberglass filler with our S.A.B. (sound attenuation board) because it is roughly 10 to 12 times as dense as standard fiberglass batts while only 2" thick.

Official testing is not available using our S.A.B. as part of these 2 diagrams and therefore no published result can be provided. Tests do show that the NRC (Noise Reduction Coefficient) of Nominal 6 pound per cubic foot S.A.B. has an NRC of 1.05 (for 2" thickness) which is estimated to be 4 times higher than standard building insulation. Additionally, while it is not published, nominal 6 pound per cubic foot S.A.B. also adds to sound transmission loss (the actual reduction of sound transmission through a substance or combination of substances) because it weighs about 1 pound per s.f. (the same as the "EB1" barrier itself).

For better results still, consider using a decoupling layer of foam tape. (We stock this in 1-1/2" x 54' rolls. ) This is installed between the drywall and the barrier and/or the barrier and the framing members to "decouple" the sheeting from the rest of the wall system. See "helpful diagrams" below.

This system is the same or is similar to practices used in "Dyno Rooms" for testing motors for race cars and motorcycles.

The only way we know to beef this system up even further is to use 2 layers of the EB1 barrier or use cement blocks. 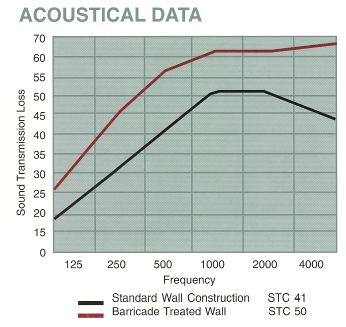